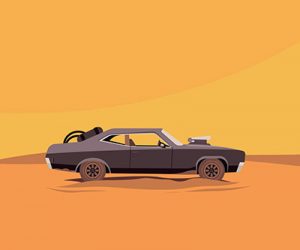 The first time I saw “Mad Max” as a youngster, I was blown away. It was unlike anything I had ever seen before. I have many scenes on my mental hard drive that will be there forever. It was so unique and so good. To this day, it remains one of my favorite movies of all time.

Fast-forward to more recent times when they came out with the remake, and I immediately rolled my eyes. I was a little bummed that they were going to take this classic movie and screw it up. The younger generations, that had never seen the first movie, were now going to have a lasting memory of this terrible picture, one, that in its original form, was masterful work (at least to me anyway). It had a young Mel Gibson—not the Mel Gibson of today who gets pulled over for drinking and screams anti-Semitic insults.

So I started to see advertisements for the new “Mad Max,” and they were showing the positive critic reviews on the screen. Again, here I am thinking, “Yeah they are showing the good ones but what about the other 100 reviews that think the film is horse manure?” So despite my trepidation, I went to see the new “Mad Max.”

Well I’ll be damned! The movie was good, really good. I had allowed myself to believe that just because something came first and was great, a new version using the bones of the original with a new twist would damage the brand. What a wrong way to think.

Content marketing scares companies. Fearing they won’t be able to produce enough content is one of the leading fears businesses face. It’s justifiable. That said, most companies already have a lot of content built from the past. This content can be reused and re-purposed.

In fact, it is a mistake to NOT use good content in multiple places and different forms. If it is good and it can pass the smell test of, “is this something my customers and prospects will want, need or love?” then you should absolutely repurpose that content. The remakes and iterations of the original can be highly effective. So when you are in that fearful stage as a company stressed about content creation and how to create enough, it makes sense for you and your team to go back and look at all of the content that has been created in the past and harvest the good stuff.

Don’t lose an opportunity to create the next “Mad Max.”